2016 Campaign: Kindle the Light of Conscience to Rescue Lives

Over the past decade, thousands of people from Taiwan have gone overseas to undergo organ transplants, especially to China. As long as one is able to pay a huge amount of money, he can receive a whole liver in a short period of time. But in fact, as lucrative as it has grown, commercial organ transplant is an illegal business and is now criminally punishable by law. What kind of organ transplant environment is Taiwan facing?

In order to raise awareness on the risks of overseas organ transplants, we have held screenings the award-winning documentary film Human Harvest in venues across Taiwan in order to to deliver the content of the amendment on human organ transplants passed in July 2015.We hope to stop illegal transplantation, uphold the law and expand the idea of organ donation, so that a safe and secure organ transplant environment can be established in Taiwan.

Because people in Taiwan seldom donate their organs, patients who need organs often go to other countries for illegal organ transplants, which has become a vicious cycle. “To improve the organ donation environment in Taiwan has always been our goal.”, said Dr. Chian-feng Huang, who participated in planning the screening. This is why our association has promoted the amendment to The Human Organ Transplantation Act in the past two years, not only to maintain the safety of Taiwanese patients but to save innocent people from having their organs harvested. Moreover, it is done to protect medical ethics and human dignity.  Due to the perseverance of the patients, lawyers and doctors in the film, the truth has finally been revealed despite the threats and concealment of the Chinese Communist Party. Their great courage has touched many people. We hope that in the 2016 screenings, the courage can similarly light up the hope of life.

A famous talk show host, Stephen Colbert, once said that the Peabody award was like “the Pulitzer Award plus the Emmy Award plus the Oscars”. All the award-winning films have to be agreed on by all sixteen Peabody Board jurors unanimously. Those jurors are authorities from different fields such as news, television and academia. In the past seventy years, all the awarded films were picked up only after keen debates by all the jurors, which is why the Peabody was one of the most difficult awards to win. And Human Harvest was approved unanimously by all jurors as one of the winners for 2014! 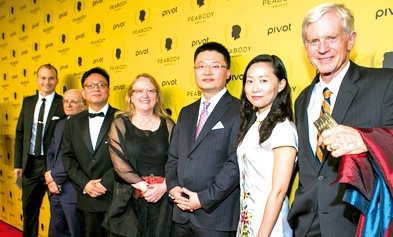 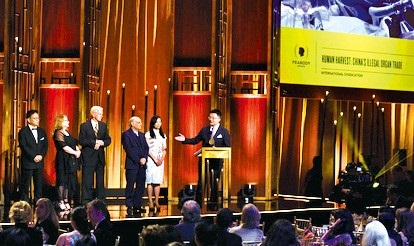 “The content of the film is related to everyone in all countries,” said Fred Young, the Vice Chair of the Peabody Board of Jurors. The main juror Marquita Pool-Ecken said “It is an outstanding film. We don’t know many of the things that happened in China. None of us know about it. No one reveals what’s happening in the world for us. This documentary brings us special information. It’s crucial to us.”

Leon Lee introduced that in his film, three Taiwanese were interviewed. Two of them underwent kidney transplants while the other was the wife of a patient who died after a liver transplant. They talked about their experiences bravely. “I believe their experiences will touch many people, including their experiences in facing death and organ failure. I think their astonishing stories in China will be understood by and touch many audiences.”

We hope that by holding screenings, this award-winning film will not only reveal the evilest crime happening on this planet, but also encourage people to think about the organ transplant environment Taiwan is now facing. Only when the government and all sectors start discussing how we may solve this problem can we enhance people’s welfare.

This film has now been broadcast in over ten countries. It was broadcast on Australia’s SBS television’s “Dateline” last year and even received the second highest yearly viewership ratings. It is estimated that about a million audiences have watched this film.