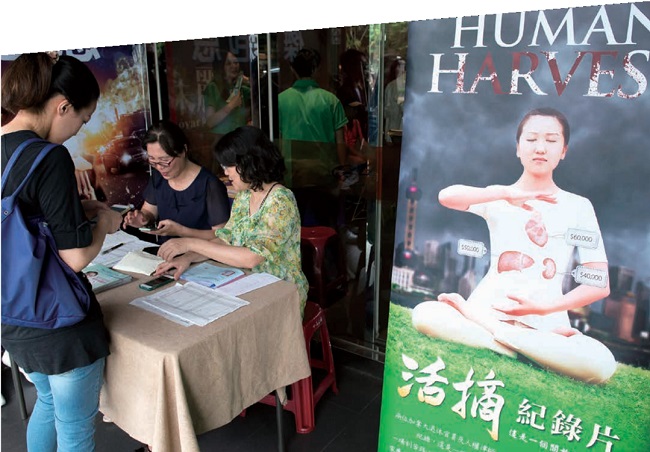 After previous charity screenings of the Peabody Award-winning documentary Human Harvest toured around campuses island-wide and gathered momentum from raised awareness among viewers, this July the Chinese version of Human Harvest finally made it to the movie theaters for its world premiere in Taiwan!

Human Harvest was produced by Canadian director Leon Lee. TAICOT began a series of campus charity screenings of the documentary this April and received much impassioned feedback. Therefore, we decided to host the Chinese cinema world premiere of Human Harvest at Ambassador Theatre in Taipei and MLD Cinema in Kaohsiung simultaneously on July 9, 2016, just around the first anniversary after passage of the amended Human Organ Transplantation Act in July 2015.

For this world premiere, the Director specifically shot a video to pay his tribute to the audience, which was exclusively screened at the premiere. Citing the latest investigative report, Lee indicated that the actual numbers of victims of forced live organ harvesting in China amount to hundreds of thousands, even millions, of people, exceeding by far the numbers tallied during the filming of the documentary.

Because of the new-found popularity of documentaries such as Beyond Beauty - TAIWAN FROM ABOVE in recent years, viewing documentaries has grown to be one of the important channels through which the Taiwanese understand current social issues.

Quite a few medical professionals reflected on their own experience at work and shared their thoughts and feelings after the premiere.

Dr. Shu-Chun Li, Assistant Professor, Graduate Institute of Gender Studies in Kaohsiung Medical University, pointed out the documentary dealt with humanitarian issues and that she invited TAICOT to host a screening and looked forward to it in Kaohsiung Medical University. Having previously taught in Quangdong, China for one year, Dr. Li is certain that the screening would allow many would-be doctors to clearly understand the truth about the forced live organ harvesting committed by the Chinese Communist Party (CCP). She also mentioned that everyone is oppressed under the totalitarian Communist regime. The CCP blocks information to keep its totalitarian power even more unrestrained.

Organ donor has her say

Ms. Gong, an audience member at the premiere, recounted that she volunteered for matching on the doctor’s advice after her mother suddenly came down with acute viral liver failure last October. The matching result proved her an eligible donor and she underwent transplantation under general anesthesia. Since she experienced living donor partial liver removal herself, she was appalled and agonized to learn from the film that many victims of forced organ harvesting in China had their organs removed while they were fully conscious and suffering tremendous pain! She appealed, “We should continue to pay close attention to Falun Gong practitioners being organ harvested alive in China.”

Ms. Chan-Juan Yen, Chairman of The Alliance of the Deaf R.O.C., said, “I feel it’s simply unacceptable that such a regime that harvests organs from its own living people still exists in the world now.” She hoped that the Taiwanese government uses national power to educate people as to how the CCP has illegally harvested organs from innocents. Television stations and print media in Taiwan should also report on the atrocity to tap into the public’s power to stop the crime.

Mr. David Yang, Director of Business Division in Golden Insurance Brokers Co., Ltd., said, “We feel shocked that in China people’s organs are harvested without consent. Such practice is inhumane and should be made known for people around the world to understand more about relevant issues. I wish for a global boycott to improve the situation.”

Mr. Jing-Liang Lin, General Manager of Easysoft, mentioned that Taiwanese people should think twice before going to China for organ transplants. He called upon Taiwanese media to break loose from the CCP’s political and economic constraints and expose with courage the truth about forced live organ harvesting so as to safeguard humanitarian justice and uphold value of human life.

Director Leon Lee interviewed a few patients who went to Mainland China for organ transplants and their family, but only the three Taiwanese in the film had the moral courage to tell their stories in front of the camera. Victims of forced live organ harvesting by the CCP include ethnic minorities like Uighurs and Tibetans, House church Christians, and Falun Gong practitioners, with Falun Gong believed to be the largest group among them. This crime still continues. Forced live organ harvesting has involved profit so huge and interested parties so extensive that it is difficult to stop it.

Fortunately, with the concerted effort of various parties along the years, both Israel and Spain have stipulated laws to criminalize transplant tourism. The U.S. House of Representatives and the European Parliament recently passed H.Res.343 and Written Declaration 48 respectively to call for an immediate end to forced organ harvesting from prisoners of conscience by the CCP. Some international organizations are working hard to bring to justice those involved in the crimes to the International Criminal Court in The Hague. Just as what the Director said, the truth is “on the verge of” full disclosure.